This is the inaugural event organised by the Classic & Sports Car Magazine. Held at the 100 year old Bicester Heritage Centre airfield.

If you are the owner of a vehicle in any of our photos and would like a copy just ask. 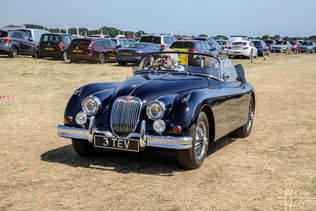 We could only attend on the Sunday and what a great day it was. The airfield is very easy to find and only a short distance from the major road networks. The local roads were organised to keep the flow of traffic moving, and we got in and parked quickly. Parking is on grass, and on this occasion, very dry and quite dusty.
This is not the same car park we used when we’ve attended other Bicester heritage events.
The site is large, covering more than 350 acres, and good footwear is advised. 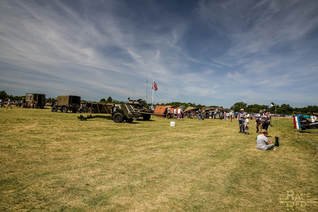 Several areas are set out to allow easy location of particular parts of the event, military, aircraft, concourse, club, and stalls.
The stalls are interesting and ranged from vintage car parts to clothing. There was an area for the kids, and a full fairground set out, although we thought very costly (Is £4 for a go on the Dodgems costly?)

There were lots of food and drink vans spread out around the site at different prices. I noticed coffee at £4 a cup and £1.90 a cup, although I could not tell you exactly what you got for your money. All food and drink at this show is expensive and bringing a picnic is advisable, especially if you bring the family. 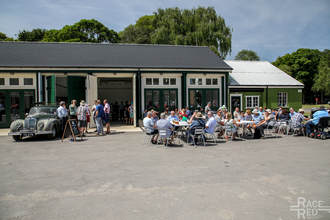 One thing new to the site is a pub, the Wriggly Monkey Brewery are about to start brewing their own ale on site. It was very nice too and at a decent price. This proved a very popular area and with good seating and reasonably priced beer made an excellent place to take a break. This area also had some very attractive cars set out around the courtyard. 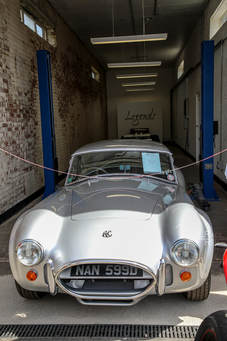 All the workshops were open and you got chance to see the insides of some very specialist businesses, all supplying their skills to the classic motor industry.
Workshops and training centres are all based around the vintage/classic car market and set in a beautifully presented and restored WW2 Airfield. They even have 4 reasonably priced rooms available for you to stay, if visiting a company or show. 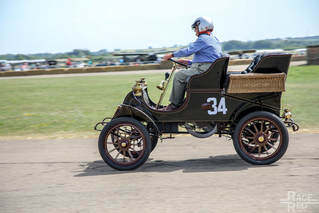 Take something to wipe your chin because just about everywhere you look will be a car that will make you salivate. The cars are available to have a close look and a chat with the owners/drivers/mechanics/enthusiasts, and all have fantastic history, with the oldest being a Cadillac from 1904. 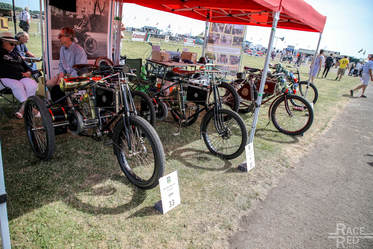 This wasn’t the oldest vehicle you could watch go around the figure 8 demonstration track, as there were several 1898/99 tricycles running around. Amazing to see how fast these vehicles were for something almost 120 years old, and from a time we all believed people walked around with a flag in front of the car.
(The flag rule went in 1878 and the speed limit was 14 mph when these vehicles were made, rising to 20mph in 1903). 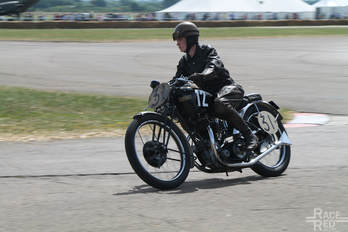 We started with the bikes, a sizable display of historic motorcycles, all with fantastic racing history. They all took to the track and provided us with a great demonstration and incredible noise. They included, BMW, Motor Guzzi, MV Augusta, Matchless, Harley Davidson and many more, ridden by riders in period race gear, and all in a determined manner.
We particularly liked chatting with 'George Formby' about his 1926 Triumph and racing enjoyment. 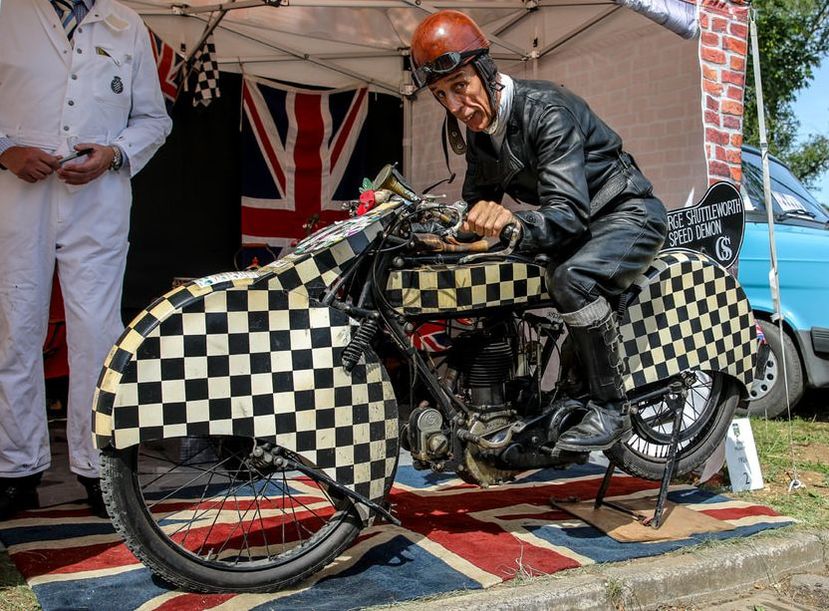 Near the Bike displays, you could find the Oscar display of cars from the Movies, with some very nice examples. This display was next to the rally display.
Once we had been around all the bikes, we made our way along the old vehicles, starting with the 1898 tricycles and moving on along the 1904 Renault and the 1914 Model T Ford racers all, the way up to the 1960s Jaguars. 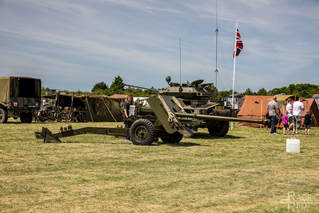 After a liquid lunch at the pub, we moved over to the aircraft and military section, although we didn’t really get time to enjoy the military displays. The aircraft ranged from WW1 to WW2 aircraft with a large display of  Tiger Moth aircraft. These made a fantastic display, in formation flying and then the Bremont Great War Display Team staged dog fights with 2 Fokker triplanes, which went on to 'bomb' the airfield, being shot at from the ground.
Later in the afternoon, we were entertained by the Battle of Britain memorial flight with the Lancaster, Spitfire and Hurricane doing a long display with several fly pasts. They are awesome to watch and this was the longest display I have seen. 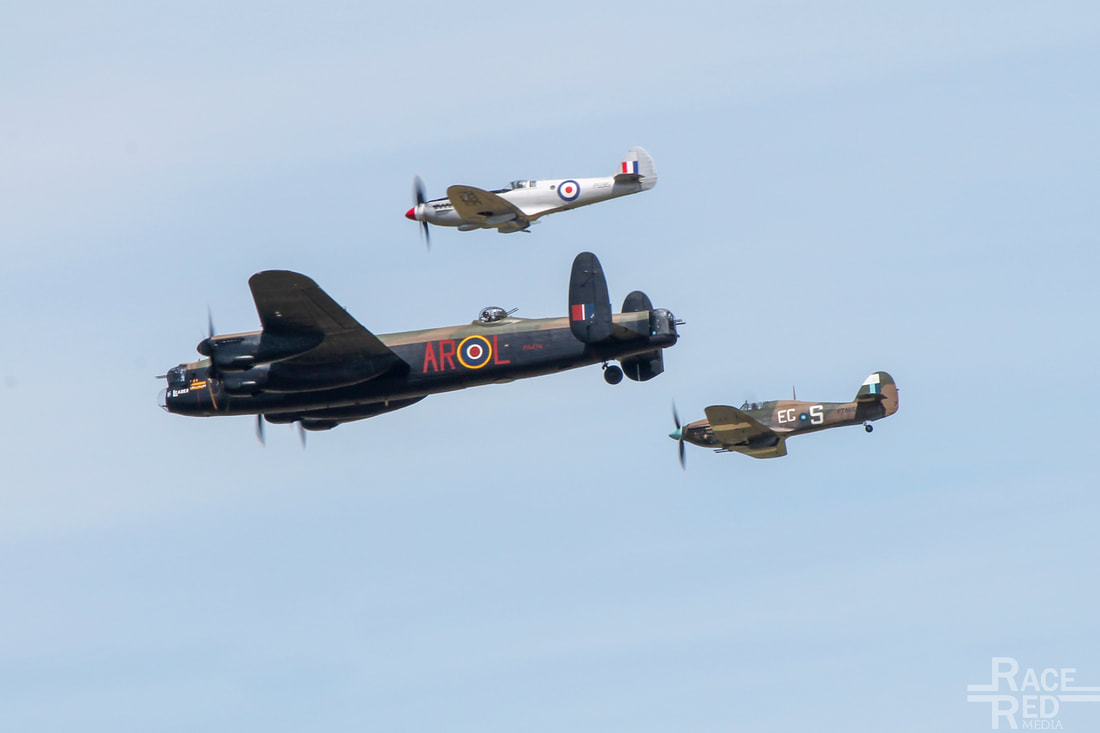 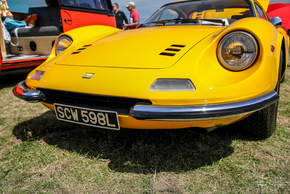 I then visited the club displays with a great show and some very interesting cars and lots of enthusiasts to chat with. The Triumph display was comprehensive.
The concourse was well worth a visit with a very nice E Type taking best of show. I have no idea how they chose the winners, as the quality was exceptionally high. I particularly liked the Yellow Dino and the Austin 100/4
This was a great show and well worth a visit with even the car park displaying some fine cars including several Maserati and Porsche, and a lovely Porsche Carrera RS. 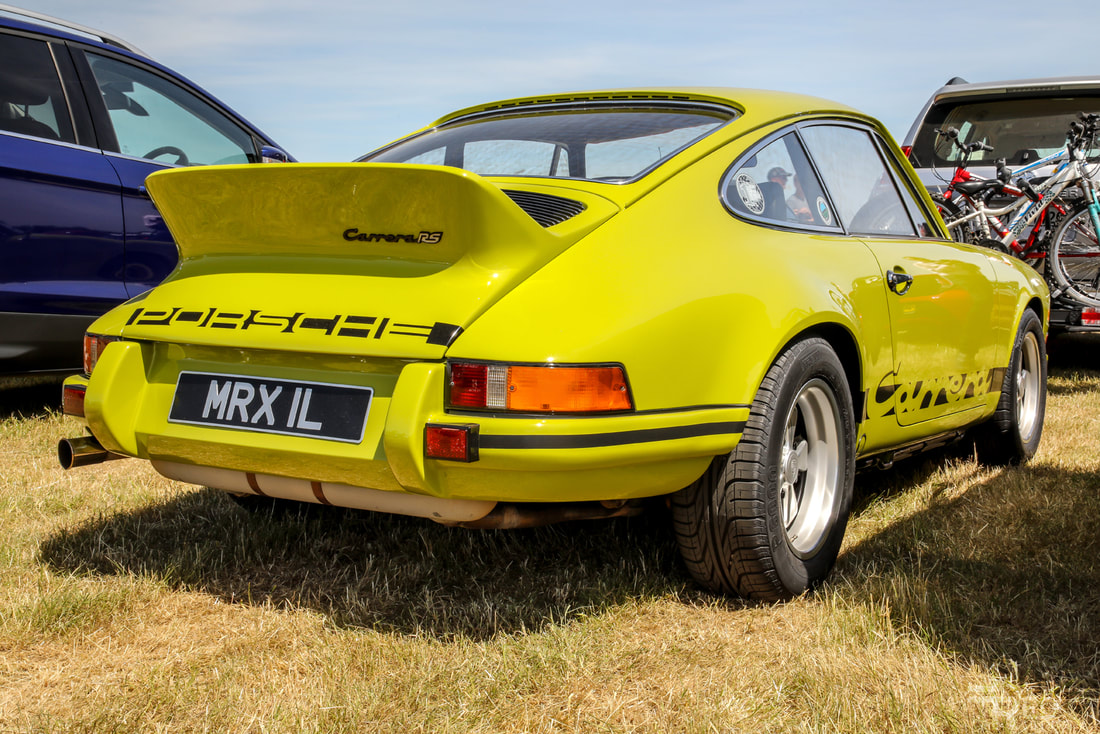 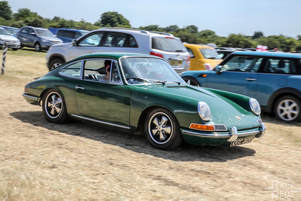 We set off on Sunday morning for Bicester Flywheel  & classic and sportscar show and had a good drive, despite the constant ‘upgrading’ of the M1.

Google Maps advised of a shortcut to shave 5 minutes off our time and for once, it was a good call! We arrived at the traffic island close to the public car park entrance and were waved right in. Great timing and good organising of the field where everyone was parked.

After getting in and signing up for the media kit, we went off to see everything like kids in a sweetshop! The motorcycles were first, but we were side-tracked by a Jaguar and a Porsche Carrera. I’d love a Jag, the new ones just have that elegance mixed with enough thuggishness to make heads turn. But out of the two, I’d plump for the Carrera, sorry Jaguar, I just would 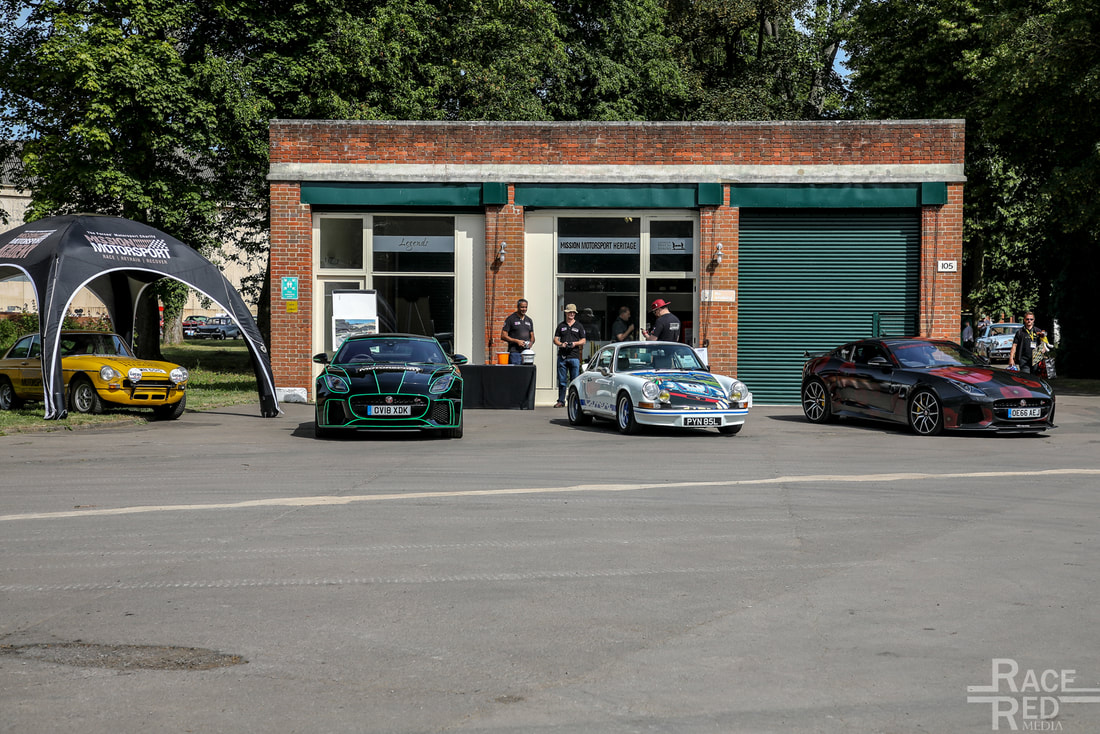 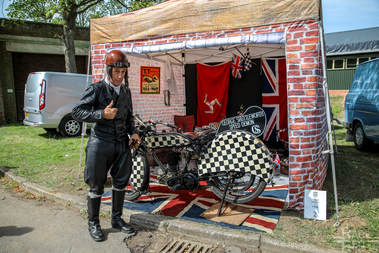 I spotted a hero of mine and I veered off to have a word with him - What fun! George Formby on the Shuttleworth Special!

He greeted me with a cheery “Turned out nice again!” and I got chatting with him. Graeme Hardy built the replica Shuttleworth Speed Demon as a tribute to the Great George Formby and his whole set-up is simply brilliant! A ‘shed’ with knick-knacks and ornaments etc all relevant to George Formby and the era, and ‘George’ was delighted to chatter away about his bike. 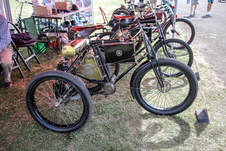 After that lovely chat, I went on to drool over the classic bikes in the preparation area. As I moved away from the bike enclosure, I heard them all starting up and some of them came past as I stood looking at some of the classic cars.

The tricycles were fascinating. Motorised vehicles more than a century old! 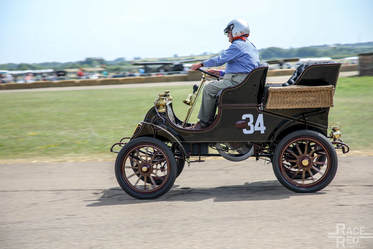 I went on to take a closer look at the start line and then moved to one of the more strategic areas on the figure 8 display track. The corner just on the crux of the 8 made for a lot of great pictures and a lot of wonderful noise!

At around mid day I went to look around the buildings where a lot of businesses have set up. Everything from recommissioning, full restoration, storage and a brewery have set up in the Grade II listed buildings. 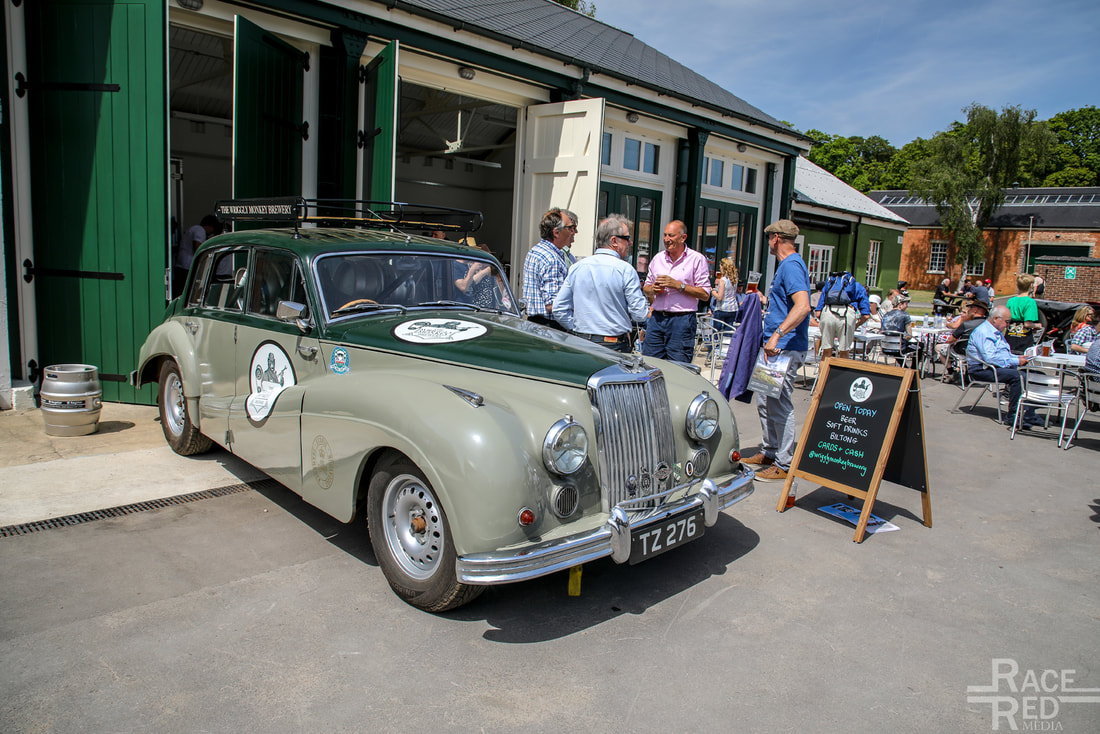 The Wriggly Monkey Brewery boasts the legend ‘Beer engineered for Petrol Heads’ and I can’t fault the claim! I don’t usually drink beer, so I opted for a shandy and I have to say it really was delicious.The bar staff were friendly and knowledgeable and Luke, the owner and I chatted for a little while. He said The Wriggly Monkey Brewery were setting up an actual beer brewing station at Bicester Heritage and there are plans afoot to set up the first fully-mobile bar which will actually be track-ready. I can’t wait to see that race! 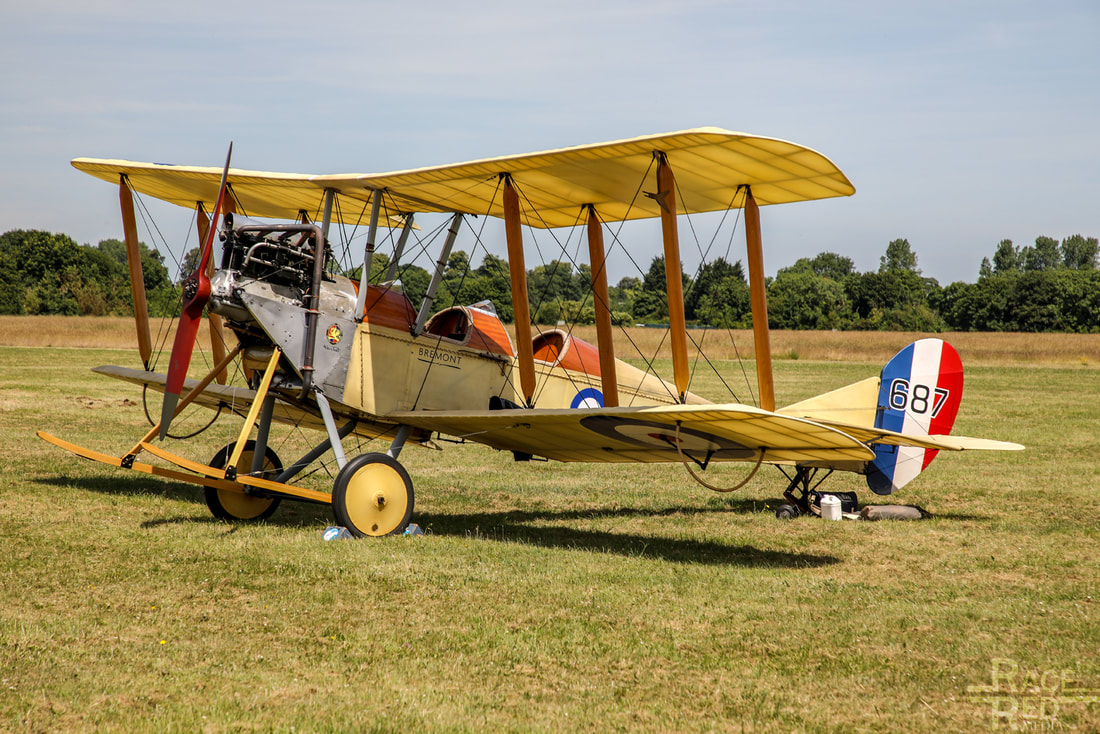 Bicester was a major WWII air flight training base and therefore strategic in the war effort. To celebrate the Centenary of the RAF, Flywheel organised an extensive and exciting air show. Tiger Moths, Fokkers, Avro 504, Lancaster, Mustang, Spitfire, Hurricane all joined in with the reenactment at the end of a long and busy day.

The only thing that slightly marred the day was by no means anything to do with the show. The traffic jam on the M1 took around 2 hours to clear. We later found out that a collision was the cause of it when the Nottinghamshire Armed Response Force tweeted pictures. I hope everyone is OK after the collision and a slight inconvenience is nothing if everyone escaped with their lives.