​We set off in fantastic sunshine and arrived at around 9am, driving onto the road inside Donington Park. This is where it went downhill as we were forced to queue for 40 minutes to get to the security. Why, we never found out, but for such an important 3 day event organisation was laking.
Then the security guard lent on Michelle’s very clean car, but we got in without delay.

We were then funnelled down into an underpass just wide enough for a Mustang but which also served as a route for pedestrians which is never right.

​Then they had parked 300 Mustangs in a swamp. I think the car clubs and infield are an afterthought and well away from the main paddocks and entertainment to be forgotten.

I also think everyone was unique with one even modified into a Jaguar.

Other larger clubs included Toyota Z240s and the other two large clubs, PCGB and TIPEC. A variety of TVRs were also lined up showing off the very special colours only TVR can manage. 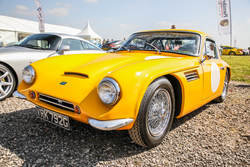 Many other clubs are in attendance but for some Sunday is their main day.

At lunch some pre booked cars got to take part in the parade lap and with 40 mustangs the sound was awesome.

Moving from the infield took you to the main paddocks and pits. In this area you get chance to see the race cars and talk to the owners and drivers. Getting close to some of the greatest cars and seeing just how well they are prepared is fantastic.

Another area is set out for rally car drivers to show their skills and cars.

The stalls are worth a look around and we had lunch in the paddock restaurant which was lovely and not over expensive.

Racing was good but I still think the races are too long.

The day was great and at a good price but I doubt we will ever go infield again due to the poor experience this year.
I love getting up close to the race cars so that appeal will remain.
Donington Photos
Mustang Photos Here 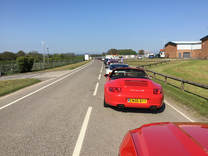 ​I’ll keep saying this until it sinks in with my otherwise awesome husband. I do not like getting up early.

Sometimes, however, it’s worth it and a few of the shows necessitate the early start, such as Donnington Classic.

Bright sunshine, glorious weather and a lovely drive in, despite the M1 and the roadworks.

We swanned into Donnington Park without a hitch... and quickly ground to a halt.

Then we queued and shuffled forward five car lengths at a time for more than 40 minutes. Some of the classic cars in the queue were overheating and were pushed off to the side so as not to impede the progress (Haha, sarcasm) of the others trying to get in.

Eventually we were at the ticket check and one of the marshals leaned on my car. Not a big thing you may think, but having worked as marshals ourselves, we know that it’s best to slather yourself in sun cream before you start work. Lovely, before we even park up, my shiny paintwork has sun factor 50 on it.

Anyway… we drove through a pedestrian tunnel to the infield. The tunnel had about 5 inches to spare on either side and they expected pedestrians to share the tunnel with cars. Health and Safety anyone? 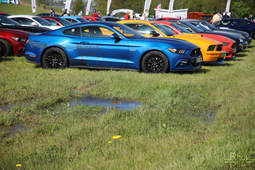 Onto the infield then and we had lots of dust, I’m sorry to say. it’s a shame, but unavoidable… as was the swamp we were expected to park in.

Donnington, I really am disappointed. I believe 300 Mustangs should rate a better welcome, I really do.

Maybe have a word with some of the amateur shows next time, to see how organising a large group of classic cars should be done?

I will not be bringing my Mustang again.
Donington Photos
Mustang Photos Here