This year marks 70 years of Porsche - and if you didn’t know that by now, where have you been?

This past weekend, various Porsche showrooms held events to participate in the celebrations.

Setting off to Nottingham early on Saturday morning with our 6 year-old granddaughter in tow, we looked forward to another adventure for the Race Red Media team (plus support). Four other dealers collaborated with Nottingham for the event at Cholmondeley Castle in Cheshire.

It looked like being a fun day, even though the weather started out overcast and a bit dismal.
Heading for the showroom, we diverted to a larger car park where we were greeted by Porsche staff to sign in, collect the car stickers for the doors and most important, the complimentary coffee and breakfast bap.

The drivers received a lanyard each, the stickers were applied to the cars, maps and instructions handed out and we were for the off!

The sound of a large number of Porsches starting up puts a smile on the face of most enthusiasts and Saturday morning was no exception. The collection of sports cars in that car park drew a lot of curious stares from the public. Though there’s always one who likes to show off, revving the nuts off his car. (Note: We know Porsches are extra-special, we’ve all got one.)

With map, satnav, itinerary and coffee all arranged and in the rightful places, we crawled out of the car park, down Electric Avenue (I kid you not!), around the island at the bottom of the avenue to make our way past the photographers recording the spectacular show of the Porsche marque.
The free for all onto the main road took longer than I expected, but looking back, getting 70+ cars organised and on the road to the location was nothing short of well-executed! Well Done Porsche Nottingham!

We followed a line of Porsches and I had chance to observe some of the passengers in cars going past. It was obvious that some had accelerated just to overtake all the Porsches. Huge grins all round!

Some of the group took the map route, some took the Satnav advice and others just followed the Porsche in front - it didn’t matter, we all arrived at the same place at roughly the same time. 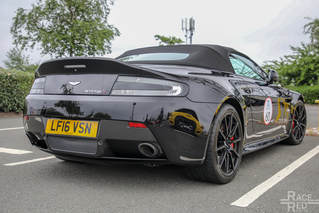 We had a great run, at times, following GT3s, a Ruf Turbo, GT2RS and any number of other prestigious Porsches. Including one Aston Martin… Porsche wanna-be or PiD - Porsche in Disguise?

The other groups arrived either before us or at the same time as we did. I don’t believe many arrived after we did, but we had plenty of time to take a good look around.
​
I thought the plan was for groups of 70 for each participating dealership, but I saw a car numbered 80. One other group had an Aston Martin in their parade too. Is this a hint of some kind of merger? 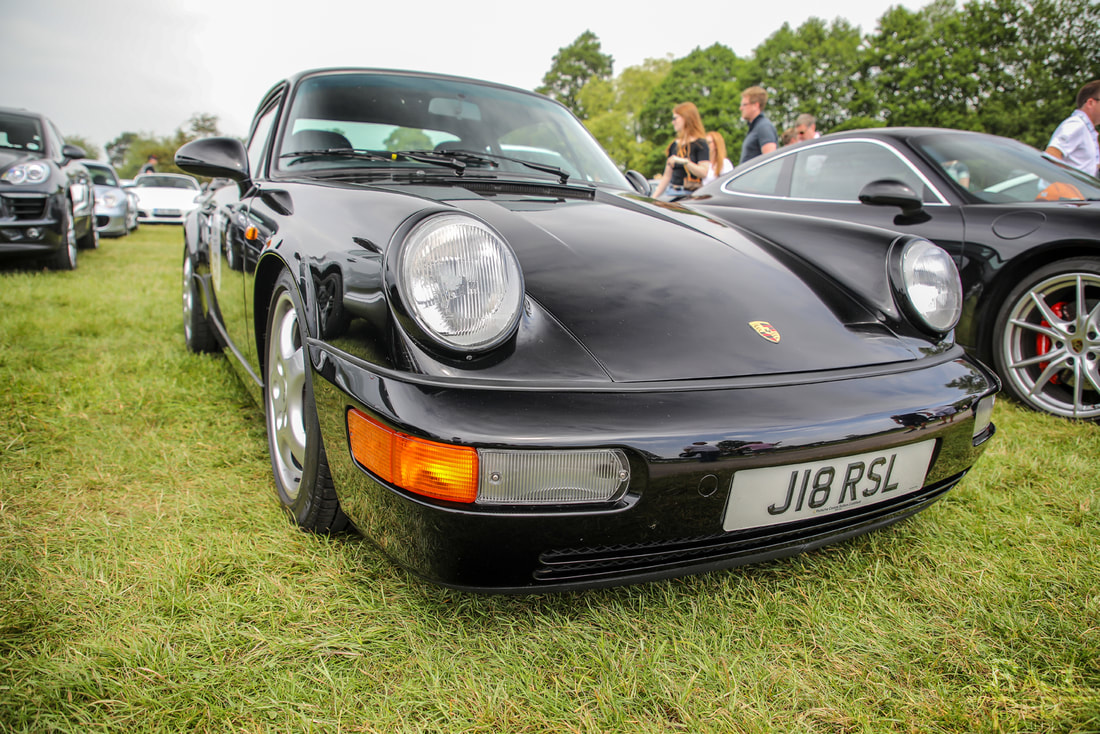 Getting to the nitty-gritty, the money’s worth of cars in that field was astronomical! Given the cost of the older Porsches these days, I wasn’t surprised to see only a few of the classics - the 911 Carrera RS at the side of us was immaculate! 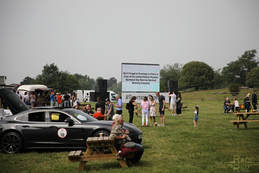 Children were well-catered for - playgrounds, a bouncy-slide, pedal go-karts and face-painting were laid-on - and so our patient granddaughter was as delighted as her petrol-head grandparents.

The shopping area did a roaring trade, cabins selling Porsche merchandise, food and beer were set up in a designated area and everything had sold out before the end of play. We took our own food as we had plenty of room in the Cayenne for the civilised basics - a table, chairs, coolbox and flasks.

The event was advertised from 11am to 4pm but people started leaving a little after 1.30pm. We left a little before 4pm and there was enough room for people to park their cars for a great photo opportunity at the Porsche 70 display signage. 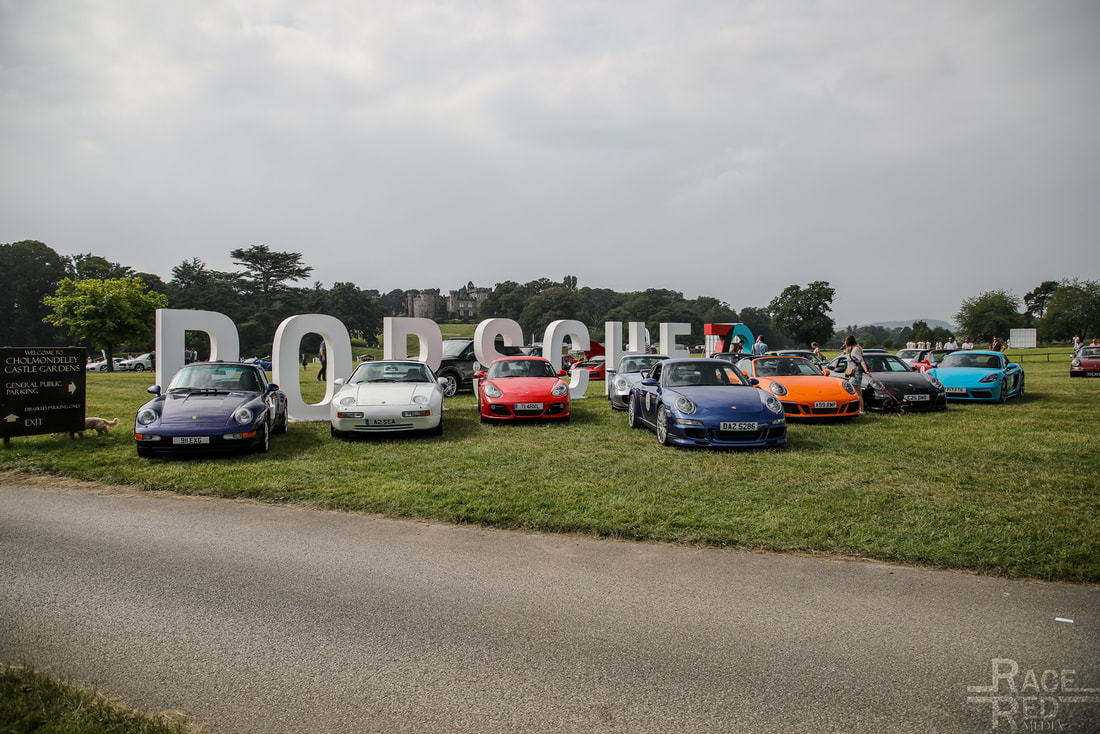 A great day for all the family!

I would have perhaps liked to go and visit the castle itself, but we would have needed to be there a lot earlier to do that. 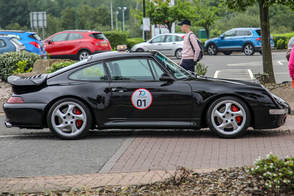 This was a weekend of events up and down the country organised by Porsche showrooms to celebrate 70 years of the marque.

We picked our local Porsche Dealer at Nottingham who, with 4 other dealers, had organised a great day out at Cholmondeley Castle in Cheshire.

We met in a car park just opposite the dealership where we were provided with number stickers for each car, lanyards for the driver and a voucher for a free cob and drink from a burger van.

The plan was to set off at 10am and we were not far off.

It was just all play follow the leader for the first 500 yards then just follow the car in front, even though we had Sat Nav setup.

I will just say we didn’t go slow and generally the drive along the A50 and A453 to our destination. We arrived at the same time although we didn’t all go the same route.

We met several other groups and although I thought we would be parked in our dealership groups that was not how it was. The odd thing about some other groups was they went up to at least 80. Our group and another also had an Aston Martin in the parade, I have no idea what that was about.

Now to the cars.
Cars ranged from a few 356s to the latest GT2RS and the odd 918 Spyder and Carrera GT. Most cars were, however, modern, and that was in the parade car park. We didn’t even visit the non-parade car park, which was also full.

One area was set out for entertaining the kids with a blow up heater-skelter and playground. The other area was made up of different cabins selling Porsche stuff and some food and beer. We took a picnic so didn’t try the food, although it must have been good, because they just about all sold out.

All in, it was an excellent day, with a great show of Porsche. We had a 6 year old with us and she thoroughly enjoyed it, which helped with our enjoyment. ​
Porsche Together Photos