Race Retro is an event well worth visiting, but do remember to take ear protection and warm clothes. (Not required this year, due to unseasonably warm weather).
Race Retro runs over three days. If you are not taking in the Silverstone Auction at the event, two days should be enough to ensure you cover everything - there’s a lot to see.  The live rally event is run on Saturday and Sunday only and the Silverstone Auction takes place on Friday and Saturday.
The event attendance is reported as 24,212 - up a little on last year.
The show is held in 4 halls of the National Agricultural Exhibition Centre, Stoneleigh, near Coventry. The location is quite easy to access from the main motorway network, with a few twisty ‘A’ roads to complete the last part of the journey.
This year it was made much more difficult, due to thick fog, which cleared and was replaced with bright sunshine soon after 10.00 o’clock.
Parking is on grass, well signposted, free, and quite near to the venue.
This year, the rally circuit was split into two sections and provided viewing of a massive range of rally cars. The new course was excellent for the drivers and press photographers, but I think last year provided better viewing for the spectators. That said, there were other reasons for the change, and it is only developing from this point
The show can easily be split into two sections, as the live rally event is repeated morning and afternoon. This year, we had Historic Kart Racing to start the live event off. 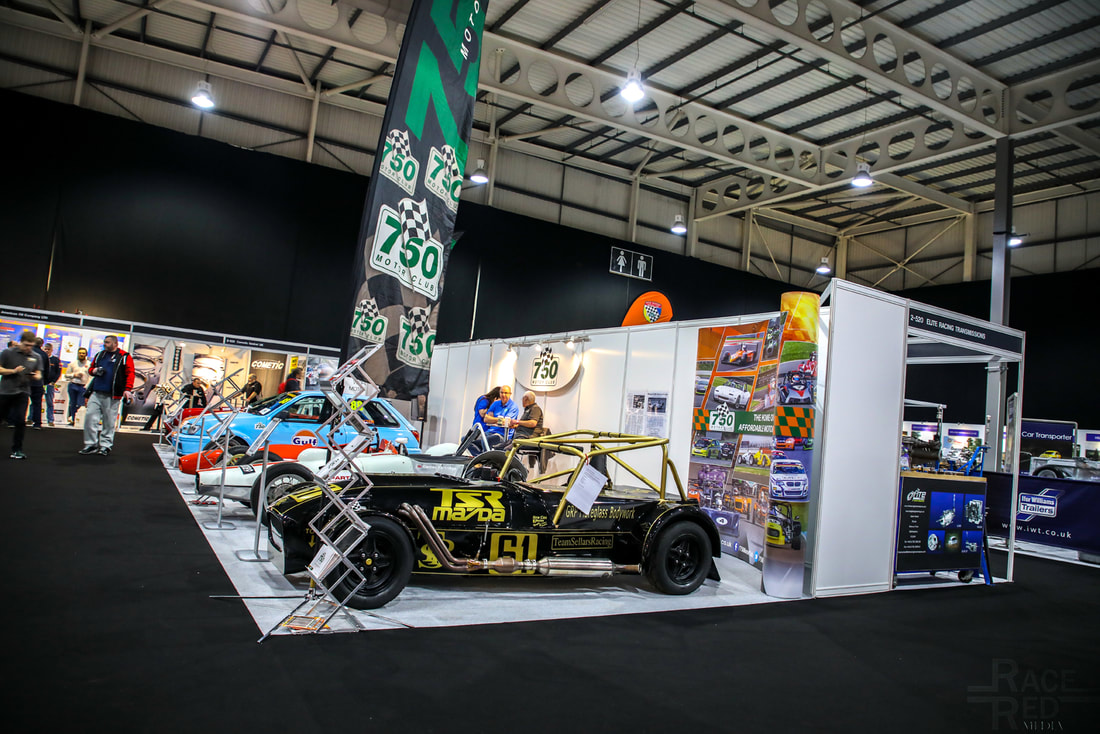 Inside the main entrance is a large café with toilets (the NAEC do need to check these better, as no soap was available when I visited). Access leads you into Hall 2 (I know, it’s a little odd) which provides you with excellent exhibitors, with everything from motorsport event organising, through to parts for your historic race car.
Some of the bigger displays were by Santa Pod who had a top fuel drag car on show and also Hawk Cars, where we spent quite some time talking with Gerry Hawkridge about his cars and car construction in general. This is the stand with the great looking Lancia Stratos and AC cars on show. This is the type of enthusiastic engineer and owner you want to meet at places like this. It set the morning off with lots of conversations between us and stand owners. We discussed rear wings, hill climbing at Prescott, circuit racing at Castle Combe and detailing with   .
The second Hall, Hall 1(?), features lots of stands selling books, paintings and memorabilia in general. The hall display is ‘Historic Rallying’
Hall 3 is 50% dedicated to the Race Retro themed displays of
LeMans
Bentley 100 years
Mike Hawthorn
Turbo F1
In this hall you get the Live Stage, with interviews going on all weekend. It is seated so a good place to have a minute, and listen and relax.
Motorcycles in the Retro & Café Racer display were again along one side and could have been better displayed.
Some art & memorabilia were also in this hall with live painting by    .
The rest was full of car trailers and we had a good look around the MSV stand at their van conversions.
Hall 4 was the autojumble and café area.
The Pride of Show display was also in Hall 4. This was a little poor, and I think I would have been disappointed if placed at the back of the autojumble shed. Cold, poorly lit, and looking like an afterthought. In view of the sunshine, this could have moved outside. Maybe even have it outside the main entrance, instead of the new Aston Martins and Range Rovers that were parked there.
The winner, voted for by the public, went to Ian Medcalf’s Fiat 500 Special Saloon with Justin Benson’s Ferrari 250SWB replica announced as the runner up.
Just about all the 120 rally cars were parked in Parc ferme at the side of the rally course, and fully accessible by the public. Visitors do need to be careful, but most of the cars make enough noise to be easily avoided.
Food was available at the NAEC in their cafes and also at several food areas in each hall. A burger van was also on site at the rally course.